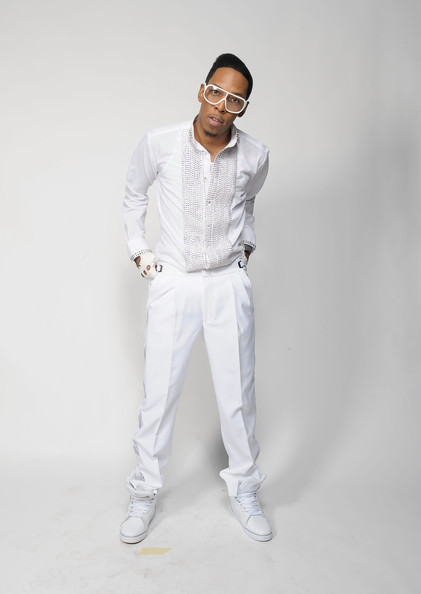 DEITRICK HADDON
Singer/Songwriter/Producer Deitrick Haddon has always had an astoundingly vivid imagination. His is a mind that has always conjured visions one would categorize as “next level.” For his fifth Verity Records CD (his eleventh project overall) the title alone reveals that he has now graduated from out of the box to off the planet. Church on the Moon is an epic eighteen song fever dream – the revelation of one Christian man considering the future of not just his fellow believers but the world at large. “The idea dropped on me out of nowhere,” Haddon exclaims excitedly…on-fire! “When something hits your spirit like that, you know it’s a gift from God. And there are moments when God will give you stuff that is out of this world! That’s what Church on the Moon means to me. There’s so much sadness and craziness going on down here on Earth, I want to take you somewhere else for a while. Church on the Moon is Gospel music from another perspective – a record that takes you on a journey. When the last song has played, you will feel far above any problems that were weighing you down.”Mixing interplanetary metaphors with super sonic sound-scapes and bedrock gospel messages, Deitrick Haddon invites the world to climb aboard his warp speed hovercraft to see civilization circa the year 3000. It’s Techno-Pop Gospel with mass appeal fueled by purified Hydro-Holy Ghost Power. Deitrick’s brother David A. Haddon (with his partner Tubbs) broke him off with the music for the straight up hypest album-opener ever – “Showstopper.” “If I do a Church on the Moon concert,” Deitrick reasons, “I must kick it off introducing Jesus Christ as the Star of the Show.”The arena is jammed, man, packed with a sea of fans / Everybody wanna get a glimpse they wanna see the man / I ain’t talking about the King of Pop / I’m talking ‘bout the King of Kings / He’s about to show us all something, something we ain’t never seen / I’m just in his Entourage, I ain’t talkin’ HBO,/ I’m talkin’ real life, I follow everywhere He go / I’m talkin’ mega star, there’s nobody hotter / His name is Jesus Christ, He’s The Showstopper.Following the mighty beats of Fred Jerkins’ “Power,” a crowd rouser on which Deitrick demands, “Stand up if you got dat Holy Ghost Power,” our host introduces some special guests on the all-star joint “Reppin’ The Kingdom” – Gospel’s answer to the comic book world’s Justice League of America featuring the United Front of Tye Tribbet, J. Moss, Canton Jones and – introducing Deitrick’s cousin, rapper-singer T-Haddy. “These are all respected artists who came together to represent the Kingdom of God, not our individual selves. Each of us ‘rep’ the kingdom in our own way. This is the start a movement…a song that will inspire young people around the globe to gravitate toward the kingdom of God.

Through a series of songs with tell tale titles like “Forgiven;” “One More Chance;” “Bended Knee;” and “Jesus The Greatest,” Deitrick Haddon lets young people know that no matter what trials and transgressions they are battling, God is always there to lift them from despair into grace. “Touch Me” bumps to an old school beat of Sly & The Family Stone meets Motown as Deitrick pleads to God to “break the chains that are binding me.” Meanwhile, “Baby You’re a Star” takes three story scenarios to poignantly hammer home the point that it’s never too late to go back and pick up your dream. The visionary in “D” summed it up ever so poetically on both the title track, “Church on the Moon” (with its bangin’ marching drums and presidential proclamations) and “Gravity.” “Gravity is an invisible magnetic force designed to keep us grounded,” Deitrick explains. “In nature, gravity is a great thing. But spiritually you want to walk in high places and connect with God. Spiritually, gravity can be connected to sin. ‘Trying to make it to Heaven, stuck on the moon / How beautiful Earth is from this point of view / So much evil back on the ground / Gravity keeps on bringing me down.’”

“King” finds Deitrick witnessing from his autobiography over a funky techno reggae groove to tell the story of a young boy with a big imagination who visualized a way out of the humble beginnings. Far from self-serving, it is a song meant to inspire young men to rise up to responsibilities and fulfill destinies. “It’s important for people to know your heart,” Deitrick continues. “On every album I do a song that speaks to the core of who I am. On Lost & Found that song was “D.D.,” on Crossroads it was ‘The Seven Ds,’ on Seven Days it was ‘Count Your Blessings,’ on Revealed I had ‘Soul Survivor,’ and on this album it’s ‘King.’ I wanted to also speak to men and let them know they are king over whatever God has blessed them to have. Too many brothers have shrunken back from taking authority over their families. I want to motivate them to take pride in themselves and their manhood.”

One of the most prolific presences on Church on the Moon is producer Blaze who first contributed two songs to D’s Revealed album (“It’s Raining” and “Running to You”). “Those songs got so many hits on YouTube, I told him I was coming straight to him on my new record because I believed there was a sound we could produce together,” Deitrick shares. “He did about 6 songs this time. He just started flooding me with great beats. ‘You Are My Strength’ was the first one we did for the new album, followed by ‘Fighting Temptation’ (about repenting from wicked women), ‘One More Chance’ (the Christian’s natural fact) and ‘Jesus The Greatest’ (praise on high). His music pulled something out of me. I believe we were destined to work together.”

The other all important partner in Deitrick’s life is his lovely wife, Damita Haddon who co-wrote several songs for Church on the Moon and sings the duet “Save Somebody.” “Damita is the female mirror of me,” Deitrick says. “I’m 100% behind her. We sang ‘This Happiness’ together on Lost & Found, my first album for Verity. I always wanted to do another one with her. The minute we heard ‘Save Somebody,’ we knew it was perfect because that’s what we are committed to doing.”

Leave it to Deitrick to release a first single about the last words all true believers want to hear at the end of their Earthly journey, “Well Done.” Rockin’ you to your soul like an anthem fortified by the reverent piano of his secret weapon Cordell Walton on piano, this song could very well be Deitirck Haddon’s personal “Purple Rain.” “When I sing ‘Well Done’ live, it gives all glory to God in a major way,” Deitrick states.

“I’ve had opportunities to leave gospel several times – with major deals. I never did it because I believe I’m called to do a specific job and I truly want to hear God say, ‘Well Done.’ It’s a goal I’m trying to reach. I believe God is creating the perfect song out of all our lives. He’s orchestrating the highs and the lows…the diminuendos and the crescendos. The lyric to our song is our testimony. And at the end of all of our songs, we should all have the same lyric. God should end our song by saying, ‘Well done my good and faithful servant. You can come on in.’ I thought it was a perfect single to kick off the album.”

***** In February of 2009, Deitrick Haddon transcended his role as a musical missionary when he was appointed Pastor of the High Praise Church in his hometown of Detroit, Michigan, taking over the post long held by his father who now pastors in nearby Inkster. Since that time, the church has exploded from a membership of 400 to almost 2,000. And when the ball drops in Times Square on New Year’s Day, that church will be christened with a new name – Kingdom Culture Church – reflecting Pastor Haddon’s mission to empower young leaders to sprout from his community and fan out into the world to spread a Kingdom Message far and wide. “I believe in raising young leaders that are bold in their faith to take authority in the culture and be influential,” Deitrick decrees. “We teach them to start their respective businesses with integrity, faith and morality.”

Beyond his music, Deitrick has been a pioneer in bringing God’s message to the big screen with major ministering motion pictures, beginning with “Blessed and Cursed.” Next up will be a film based on the Church on the Moon all-star song “Reppin’ The Kingdom” followed by a project of Damita’s tentatively titled “Woodward” (named after a notorious street in Detroit plagued by prostitution, drugs and all manner of vice). “Producing our own films is a dream come true,” he says. “I’m excited to be among the first to bring independent film to Gospel and to give our artists a powerful platform to share our awesome stories.”

For Deitrick Haddon, it’s all in a day’s work and a life’s mission to keep his eye on the future of faith via the seed of an idea that exploded into Church on the Moon. “From a theological point of view,” Deitrick concludes, “The Bible says to let your light shine so that men may see your good works and glorify the Father that is in Heaven. The moon illuminates the night but does not have its own light. It reflects the light of the sun. That’s what we as believes are supposed to do – to shine not the light of our own agendas but the Light of Jesus Christ. I strive to do everything that God has placed on my hear to contribute to The Kingdom – to make the world respect Gospel and see us not as just religious people but people that are relevant and highly connected…people just like them, only we go to God to make some sense out of all this chaos that we’re going through